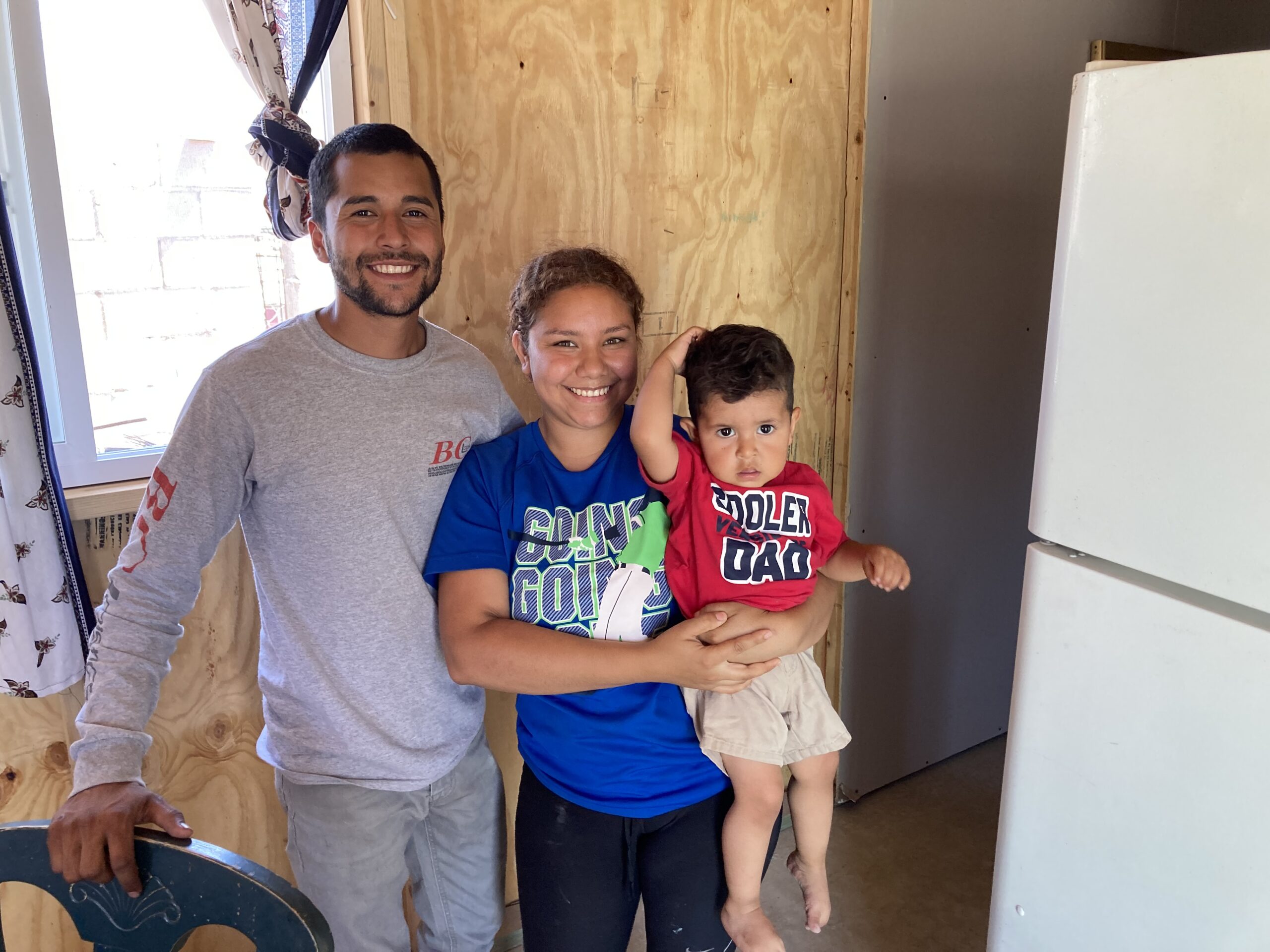 From a House to a Home

Lucero and Alonso are in their mid-20s and met at work, in one of Tijuana’s many factories (called maquiladoras). They were previously renting a house, but in late 2020 the landlord did not renew their lease. As a stop-gap measure they moved in with Lucero’s parents and simultaneously announced that they were expecting a boy. While exciting, they were in need of a space of their own.

Lucero spear-headed the effort of applying for a Doxa house. She found Maria at Unidos por Siempre on the East side of Tijuana. After going through the interview, submitting required documentation, and doing 250 hours of community service, she was put on the waiting list.

In April 2022, a group from First Presbyterian Church Spokane came to Tijuana, and over the course of a week a house was built. This was one of three houses that they built while in Tijuana. Lucero and Alonso now live in Terrazas del Valle in East Tijuana with their son, Jasiel.

Maria went back to visit with Lucero and Alonso at 2 months and 4 months after the house was built. Follow-up visits allow a continuation of a relationship with each family, to see how they are doing, to come alongside in other needed ways, and share in the joy of the new place to live. We’d also be lying if we didn’t add that we double-check to make sure the house is holding up well and performing as designed (haha!).

As Maria arrived, Lucero emerged from her house, walked across the dirt patio, and around a big pile of sand and gravel to open the front gate. She welcomed Maria in with a smile, asking how she’s been. Maria slowly makes her way towards the house and when entering, Lucero offers her a chair and asks about the volunteer group. Lucero remembers them fondly and says she still keeps in touch with some of them. Alonso reaches for a picture of the group and points out the ones who made the biggest impression on him. Lucero shares how she worked alongside the group to build and, unexpectedly, saw the students working so hard each day. She felt humbled by the fact that these people came from so far to help her and her family. To help provide them with something that they could never repay, but just with their thanks and appreciation.

Alonso shares his appreciation for the solid concrete floor, sturdy walls, and roof. He’s quick to share about future projects they have planned. A living room and kitchen addition, bathroom addition (in progress), interior drywall, and small cement patio out front for Jasiel to play. They are already thinking forward to when Jasiel will need more of his own space. Alonso gets up from his seat and shows Maria behind the house, the walls of the kitchen and bathroom are already going up and the bedroom is already partially drywalled.

Jasiel, meanwhile, is just starting to walk around the house. He uses a little plastic cart to push around and bumps into just about everything. He smiles as the dog occasionally swings by to give him some attention. The dog is a more recent addition, came one day and decided to stay. So, a dog house was also made in the same style as their house.

As Maria wraps up her visit, Lucero and Alonso light up with gratitude. Humbled to receive such a gift and now a desire to be good stewards of this new opportunity. They are excited for all the future milestones that they will have here, a place they are proud to call home.

I have never experienced anything like this before. It was a wonderful few days we spent together, made new friends, learned some new skills, and was able to give a smile and joy to a family. It was extremely gratifying to see the house we built together.