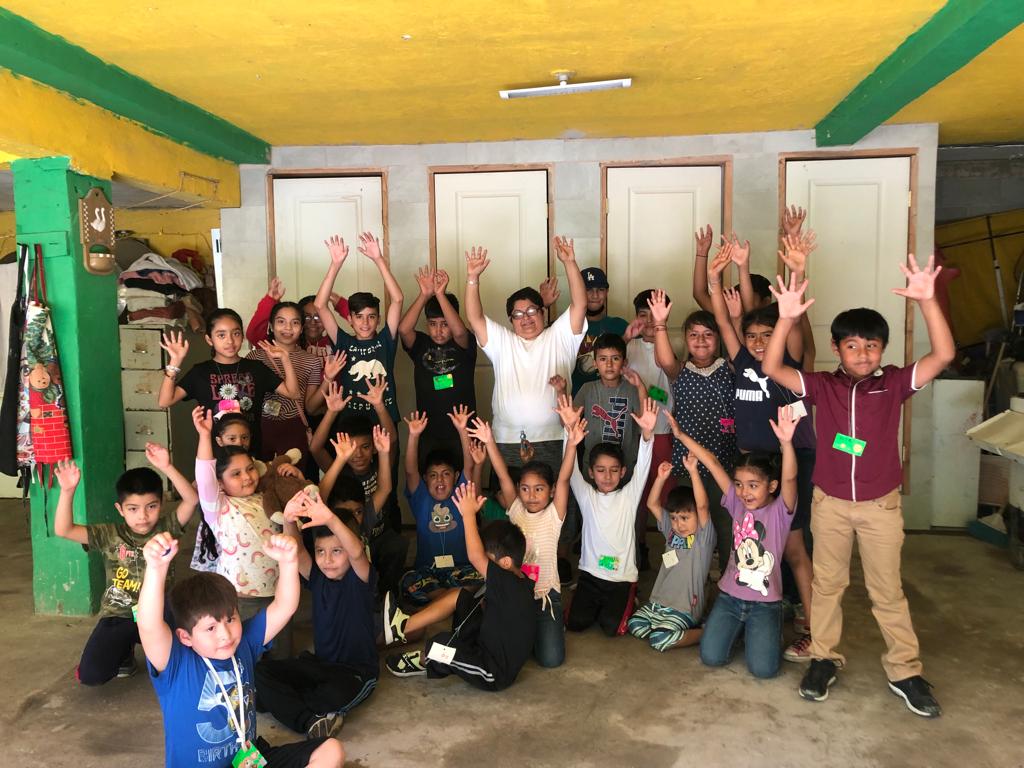 Angeles explained that Unidos por Siempre has gone through three major chapters in its life: soup kitchen, orphanage, and social assistance. The constant, though, is its commitment to the Rojo Gomez community and maintaining relevance by adapting to changing needs.

From 2002 until 2008, Unidos por Siempre was only a soup kitchen. Angeles was just 6 years old at the time and remembers helping to bring out chairs and tables each day for other kids to come and eat lunch. She vividly recalls that one of the tables was made of particle board and the corner would slowly get chipped away from all its use. Maria remembers a big tree that used to provide shade, but also get in the way. During those years, Unidos por Siempre established itself as a place where the community could come to eat and gather for a little bit each day.

Then, from 2008 until 2020, Unidos por Siempre became an orphanage. Angeles remembers that it all started with a pull-out couch, which was the first bed. She recalls there being a mountain of kids around as they would have pajama parties regularly. Maria reminisces on all the energy and excitement there was as more beds and rooms were slowly added. Most kids were from the surrounding community and needed outside support to survive. There were also some kids from DIF that the government temporarily placed there. Maria is proud about those days, in which they didn’t always have everything needed, but did they best they could. What they lacked in resources, they made up for with kids and community.

Maria specifically recounts three kids who have had a lasting impact on her. Osvaldo came to live at Unidos por Siempre when he was 9 and was very timid a first. What ended up bringing him out of his shell was the food and sharing mealtime with everyone. He lived at Unidos por Siempre for years, ended up completing college, and is now a criminologist. Luis is another child who grew up at Unidos por Siempre, who is now an engineer. Gustavo is yet another child to complete college and is now an accountant. Maria’s face beams with pride as she recounts their stories, like she’s being taking on a trip down memory lane herself.

Angeles calls the current chapter of Unidos por Siempre “social assistance.” While there are still kids who call Unidos por Siempre their permanent home, it is not the same quantity or need that the orphanage used to fulfill. Angeles explains that the community of Rojo Gomez isn’t quite as poor as it used to be and the needs are slowly changing. Maria adds that the main focuses of Unidos por Siempre are now temporary housing for kids and families, education, childcare, and food. Maria’s desire and call to the community of Rojo Gomez is as strong as ever, even as needs change.

When asked about the legacy of Unidos por Siempre, Maria gets a little emotional and conveys her hope that each person passing through would know and love God, be well-educated, and learn the value of cleanliness. She states that the best inheritance she can leave for kids is a good education. Angeles agrees and adds that her journey to finish college wasn’t always easy, but wouldn’t have been possible without Unidos por Siempre’s help.

Today, Maria sees the impact of her many years of work as most of the kids still keep in contact. She gets invited to quinceañeras, weddings, and baby shows. It’s not uncommon for her to see kids that grew up in Unidos por Siempre with kids of their own now. Just as Unidos por Siempre has made a big difference in the lives of many children, Maria has also come out changed. It’s impossible for anyone to forgot those formative years together.

Maria closes our time together on a note of thankfulness. She is grateful for all the help and opportunity to know so many people. She has crossed paths with kids, Tijuana government officials, volunteers, families, and various partners on both sides of the border. She’s joyful and thankful to have been in a position to invest time, love, and care into so many lives that have come through Unidos por Siempre.

It was amazing to go to another country and help change someone’s life. Building a home was a satisfying experience. There are so many underprivileged, impoverished individuals and families in the world, and Doxa is helping make their life better. Helping someone is a wonderful feeling.